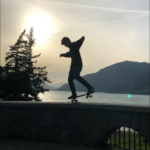 More and more of today’s younger generation are discovering the benefits of massage. Even though many of the massage students at OSM are middle-aged individuals going through career changes, there has been an increase among millennials in massage. James started at OSM in 2017 after realizing general education classes at his local community college just weren’t cutting it. However, his journey to appreciating the value of massage wasn’t a comfortable one.

Massage from an Early Age

As an active child, James was commonly abusing his muscles through skateboarding or hiking. He benefited from regular bodywork trades with his father, who was experimenting with bodywork. A car accident at the age of 16, reinforced his interest in bodywork. With a broken arm, internal bleeding, and wounded ribs, James found relief with Pranic Healing energy work, chiropractic care, and regular massages. This was the first time he received a professional massage. There were many similarities with the techniques he practiced with his father, and he found himself wanting to emulate them.

James started community college a year after the crash, but kept thinking back to his treatments and how much they helped him. “A key part of me being drawn to massage was due to receiving massages after my accident; I just want to help others how the therapist helped me.”

Since starting OSM, James has become more and more excited about his future career in massage. Increasing his knowledge of the body and practicing proper techniques have increased his passion for the work. “I’ve always been a caring, nice person and throughout massage school, I learned it related to my personality as well. All therapists are generally here for one thing, which is to help out people.”

While still unsure of focus he will have in the profession, working with athletes and Barefoot Shiatsu have sparked his interest. Overall, he has received many benefits from his education thus far. “The cost was so worth it, compared to what a four year college costs. Totally worth the money and the training is great, teachers are amazing. Feel like I have very genuine relationship with all my instructors, better than what I had in high school.”

One Response to Student Profile – James

Explore the Admissions Section in the menu above.
Find Program Information.
Learn about Tuition and Payment Options.