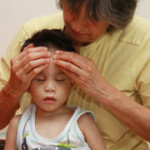 November 2013
Hello Friends in Oregon and everyone at Oregon School of Massage,

Traveling
I have been in Indonesia for 10 days. Trip uneventful but met some interesting people who have immigrated to the United States from Asia and returned to see family or do business. They all said they would never dream of returning to Korea or Vietnam, life in the US is much preferable.

I went to Jakarta first, stayed overnight in a hotel and went directly to Bangpingang (I think) to attend the opening of Fifi Lim’s 21st mom and baby spa. Interesting way they do things, they just set up a big tent right out in 2 lanes of traffic, set out tables with dishes and silverware and loudspeaker and signs, and the traffic had to go around the tent: like setting up a big camping tent in the middle of Highway 99 and expecting everyone to notice you before they run you over!.The assistant mayor was there, the mayors wife and a bunch of other dignitaries, Fifi said a few words and so did I-fortunately brief since about all I can say in Indonesian is good morning and “where is the toilet’.

Then we returned to Jakarta, which remains a hotbed of industry, pluck, cultural mixing and inequality, all to a high degree. Pollution and environmental problems continue to be incredible, and deeply discouraging for the future of the
planet.

Teaching Spa Treatments
Just finished 6 days of teaching for Fifi’s senior therapists, who will fan out to all the spas to teach the treatments I put together this time. Many of the therapists see 6-10 babies every day, day in and day out, for spa treatments and are very skilful in handling them-with far more experience than I have, and with obvious love for babies and small children. They are young, peppy, and fun to teach!

Tomorrow will be a rest day -although I have done far more difficult work than teach something I love, to people who are excited about learning it-and I will go on a 6 hour tour of Jakarta. Various places such as Jakarta’s Chinatown, the national museum and Colonial Oldtown. (The Dutch were the overlords in Indonesia for 200 years, drawn here originally for nutmeg, cloves and cinnamon. Nutmeg kernels were so valuable in Europe that they were willed to relatives when the owner died.) Then on Monday a class for 100 therapists-a big team-building affair-and then off to teach in 4 other major towns

Cultural Diversity…Culture Commercialized
Perhaps the most interesting thing about traveling, for me, is the mix of cultures. It is so easy to adopt something from another culture in a superficial way, without any idea of its original context and what it meant originally, and sometimes the mixes are odd, humorous, or downright ridiculous. For example, when I was in college in Berkeley, you would see  middle and upper-class college kids who had become Hari Krishnas chanting for hours on end, deeply immersed -or so they thought-in Indian practices, without having any idea of what the chanting meant to the people of India. And you can bet they didn’t really want to go live in India either, if it meant giving up their comforts, washing machines, hot showers, garbage service, TV’s and such!!

Here you see the adoption of Western culture without an understanding of the price the West and the planet have paid for our material wealth. A Korean man bragged to me about South Korea, ” We have malls! We have shopping!!”  I note with amusement an Indonesian-made cookie that comes in a box that features a drawing of a big black cookie with a baseball cap, holding a basketball and a whistle, with the caption ‘Whasssup Man? I am Chocomaniac, the chocolate cookie!”

I saw a program on BMX biking in Indonesia this morning on TV, with rap music in the background: I cant imagine the origin of rap and the culture of the black ghettos of our large US cities comes across. Really, its more like a culture can become a product and nothing more…And speaking of culture as product,yesterday, Fifi and I went to the Balinese Heritage Spa,interestingly named since many of their treatments are anything but traditional. (Not that the almost-entirely-tourist clientele would know the difference.) 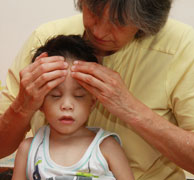 Always New Treatments
The boss  delights in coming up with new treatments, and the spa is in the Guiness Book of World Records as having the largest spa menu in the world, with over 200 treatments. They have a ton of different body treatments such as body scrubs made from grains, herbs, aromatherapy oils, a solid gold facial etc. but they also feature a wide variety of massage treatments, which are wickedly innovative to say the least. These include a leech massage using live leeches,a vacuum cleaner massage treatment (using a hand held Dirt-Devil type), boxing glove massage (includes a lot of punching), python massage (it feels cooling when the snake slithers over you, so my therapist said), a golf ball massage (photo shows the balls placed just like the hot stones would be for a standard hot stone massage, up and down the length of the back), a massage where you lay on a table that is all spikes, and a massage using metal bearings.

And finally, the Guerrilla Spa Monkey (the theatre part)
The treatment for which I had come was the Rainforest Urban Guerilla Spa Monkey massage. When I read about it in an advertisement I knew I had to try it! The therapist wears a gorilla costume and gives you a massage “inspired by our primate friends”, what ever that means. It turned out to be a traditional Javanese treatment-and the therapist was not bad. She greeted me in the waiting room in her full body gorilla costume complete with mask. (if you dont believe me, just Google, “Urban Guerilla Spa Monkey”)

She capered around, then escorted me upstairs in her costume, to the hilarity of all staff and customers that we met. I knew her costume must be super-hot, so I told her she could remove it during the massage if she wanted to. (She turned out to be a single mom from far away in Java, working to support her 2 young children and save for their education). She put the costume back on afterwards and we went back downstairs, again to the hilarity of staff, customers, Fifi and I. She told me that nobody else wanted to wear the costume, so she decided she would do it. So ridiculous! But maybe for some gullible (ahem) tourist, this would seem like a very green and appropriate idea…

Enough for now-catch you on the next installment. Hope all is well and thinking of you now from thousands of miles away…